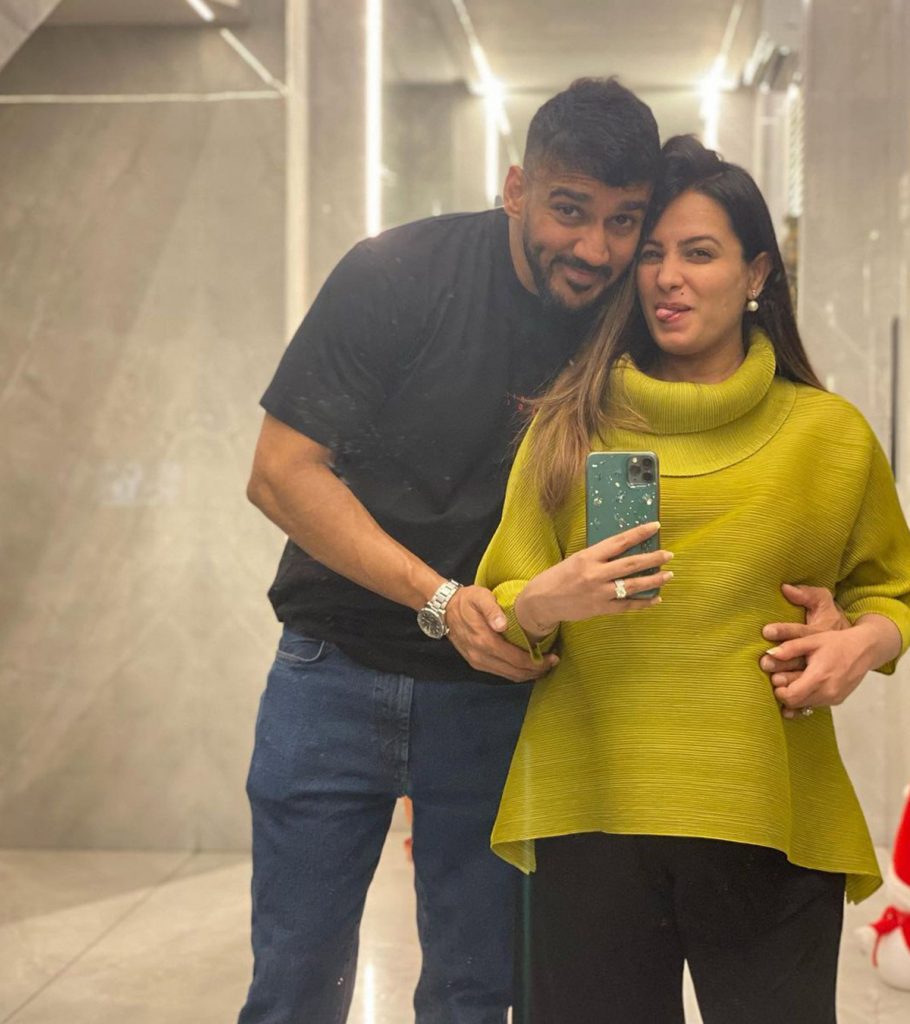 Celebrities have a huge fan following all over the world. In India, stars have god statuses in the eyes of their fans. Some fans tattoo their favorite celebrity’s name on themselves, and others wait hours in queues to catch a glimpse of their heroes. As much as it is flattering to be a celeb, the lack of privacy and constant media scrutiny can make it difficult and frustrating. When celebrities get married or have a baby, they often ask their fans to respect their privacy as they would like to spend that time with their loved ones. However, with time, most celebs share their precious moments with fans to spread the joy and happiness they feel. Recently, Indian television actress Anita Hassanandani and the love of her life, Rohit Reddy, were blessed with a baby boy. They finally shared a first look picture of the little munchkin, and it is beyond adorable. Scroll below to know more.

Anita Hassanandani and Rohit Reddy were blessed with their first child on February 9th, 2021. A few days later, Anita shared a picture of the three of them on Instagram, but she covered the baby’s face with an emoji. She wrote, “And just like that we were three! Blessed with the best! Thank you each one of you for your beautiful wishes.” Friends and fans congratulated the happy couple and sent a lot of love. But wait, there’s more!

The couple took to Instagram to share a video finally revealing the newborn baby’s face. The video shows Rohit pretending to light an imaginary explosive (which is Anita’s baby bump). When the explosive blasts, the baby arrives! It was a cute and creative video, and the new parents look as excited as ever. They revealed the name of the little one in the caption, saying, “And our baby AARAVV has arrived”, along with the date. Check out the video below:

Anita Hassanandani, popularly known for her roles as Shagun Arora in Yeh Hai Mohabbatein, Vishakha Khanna in Naagin 3 and 4, and Anjali in Kkavyanjali, married Rohit Reddy. He is a banker, entrepreneur, and marketing strategist who went to the same gym as Anita. In an interview, Rohit revealed that he noticed how gorgeous she was but did not say anything to her at the gym. However, he saw her outside a pub and decided to approach her. Rohit stated that he did not know that Anita was an actress when he made his move. He said the corniest things to her, and she was taken aback. That encounter ended there.

They met again through a common friend, and this time Anita was impressed by his kind nature, gentlemanliness, and cute dimple. Before long, they knew what they had was special and decided to be life partners. In an interview, Anita shares a story about when she knew he was the one. She said that she enjoyed drinking when she was younger and went a little overboard one night (we’ve all been there). When Anita apologized to Rohit and told him that she’d give up drinking, he said she never had to give up anything for him. Rohit’s concern was that she had to be careful because she was a public figure. Anita said that it was at that moment that she knew he was the one. He accepted her for who she is and did not expect her to change.

They tied the knot in 2013 in Goa and have been madly in love ever since. Anita and Rohit took care of every detail of the wedding themselves and made it a grand and memorable event. Rohit revealed that their wedding was quite “chilled out”, and during the sangeet, they were all drunk and dancing on the bar top. Sounds like a fun wedding!

We are excited for the happy couple to start their life of parenthood together and wish them lots of love, good health, and happiness!

Pregnant mother must eat it this. | health tips for pregnant women | Health tips |

20 PREGNANCY HACKS EVERY WOMAN SHOULD KNOW

How To Help A Congested Baby Breathe

Some tips for parents as students begin distance learning

Parenting Tips – How to Give Time-Outs | Parents

NUTRITIONAL ADVICE I WOULD TELL MY YOUNGER SELF

5 Advantages And 4 Risks Of Becoming A Mother After 40

NUTRITIONAL ADVICE I WOULD TELL MY YOUNGER SELF
We use cookies to ensure that we give you the best experience on our website. If you continue to use this site we will assume that you are happy with it.Ok