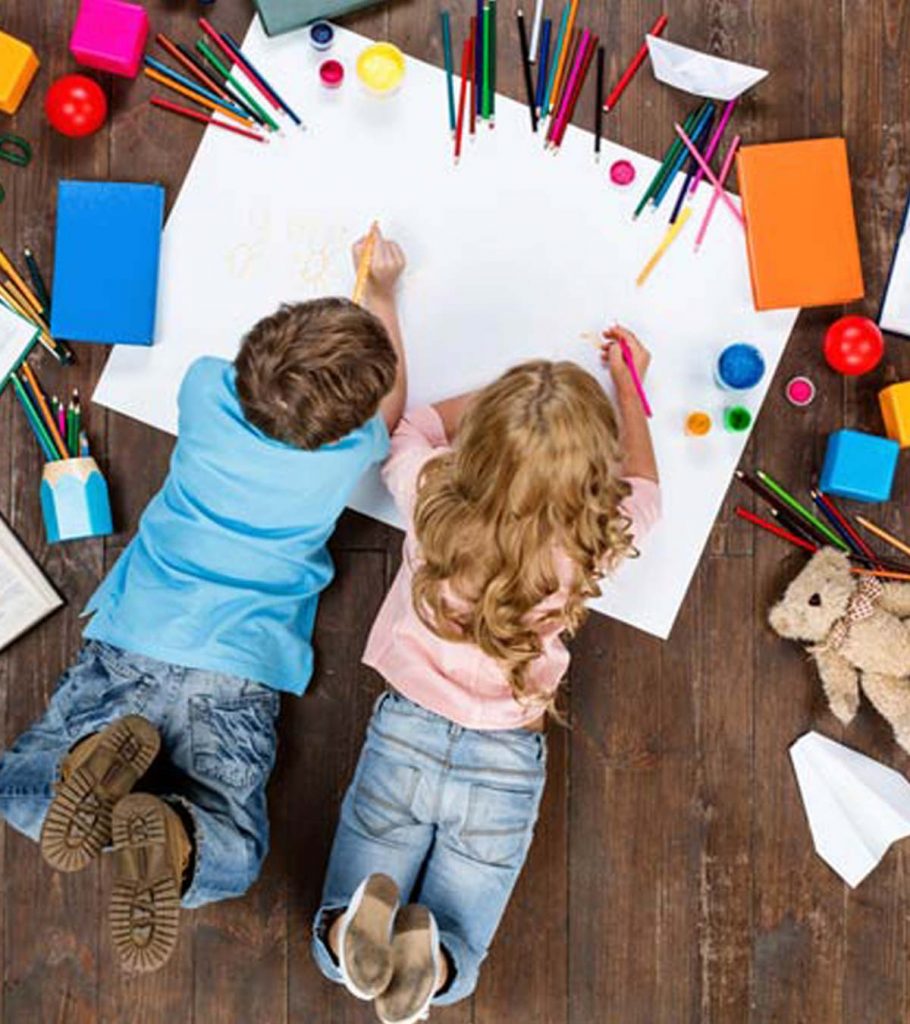 Remember when you were a kid and didn’t have the internet or television to keep you busy? You spent your free time outdoors, playing with your neighbors. Or you would paint, draw, dance, sing and keep yourself entertained because there was no internet or smart devices to distract you. It was a fun time, and it helped you keep your imagination high because you had to come up with creative ways to spend your time. With smartphones and tablets taking over, you might be worried that your kids are losing their creativity and imagination. Well, we’ve got news for you. You can fuel your kids’ creativity with these 7 simple techniques. Scroll below to know more:

1. Let them Take The Reigns

When your kids come to you during playtime to guide them or help them, play dumb and act confused. It gives your kids the chance to figure things out using their imagination. With building games and activities like drawing and painting, kids tend to imitate adults. Therefore, let them begin, so they make use of their creativity.

2. There Is No Right Way To Play

Parents often get caught up in the game rules and correct their kids to ensure they play the right way. But playtime is about fun. Therefore, if your kid wants to make up a few rules and get creative with a game, give them the freedom to do it. As long as your kids are having fun, the rules of the game don’t matter as much.

3. Old Fashioned Is The Way To Go

Toys that are available in today’s market are fancy and complicated. While they might have a good look appeal, they rob children of their creativity. Invest in simple, old-fashioned toys that encourage every kid to project their ideas on the toys. Blocks, toy cars, dolls without frills, etc., allow kids to create a fantasy world and let their imagination run wild.

Instead of sticking to mundane conversations at the dinner table, which revolve around asking your kids how their day was, add a twist to it. Create a scenario and allow your kids to get their creative juices flowing. The “what if” game works pretty well. Ask them, “What if you found an alien in your room?” or you could say, “If you were the President for a day, what would you do?”.

5. Allow Your Kids To Flow

Don’t restrict your kids to follow the usual techniques. If they want to paint using their fingers, let them go for it. Don’t be afraid of the mess it creates because imagination and creativity are usually born amidst chaos. Let them use leaves, petals, twigs, or whatever they find suitable to create an art piece. All you gotta do is let them go with the flow and not barricade their thought process.

6. Dedicate A Space To Fuel Creativity

Kids love to play in make-believe scenarios. They pretend to be pirates in ships, soldiers on the war field, or a queen ruling the kingdom. They might even set up the scene with race tracks, building blocks, and what not to suit their story. The toys lying around the room may be messy, but instead of being eager to clean up the mess, dedicate a play area for your kids, so they can revisit the scene and expand their creativity.

7. Boredom Is Not A Bad Thing

Allow your kids to be bored. You often hear them say, “I’m booooored”, and you tend to think of ways to entertain them or keep them busy. But boredom sparks creativity in ways you cannot imagine. Therefore, instead of suggesting ways to kill their boredom, let them figure it out on their own.

You might think that it’s difficult for your kids to be creative in a digital world. But with these simple tricks, your child is bound to become creative and let their imagination run wild. You could also encourage them to tell their own stories and never fail to appreciate all their creative work. If the points above were helpful to you, share this article with fellow parents!

Pregnant mother must eat it this. | health tips for pregnant women | Health tips |

20 PREGNANCY HACKS EVERY WOMAN SHOULD KNOW

How To Help A Congested Baby Breathe

Some tips for parents as students begin distance learning

Parenting Tips – How to Give Time-Outs | Parents

NUTRITIONAL ADVICE I WOULD TELL MY YOUNGER SELF

5 Advantages And 4 Risks Of Becoming A Mother After 40

NUTRITIONAL ADVICE I WOULD TELL MY YOUNGER SELF
We use cookies to ensure that we give you the best experience on our website. If you continue to use this site we will assume that you are happy with it.Ok